Sarah Youmans, age 20, was convicted of Felony Auto Theft and Felony Bringing Drugs into a Correctional Facility.
On August 10, 2018, Ms. Youmans stole a car from a family member.  She was later contacted at Walmart, where she was apparently in the process of committing a shoplift.  After being arrested, Ms. Youmans was admonished that bringing narcotics into the booking area of the El Dorado County Jail was a felony.  Apparently undeterred, Ms. Youmans failed to disclose that she had methamphetamine hidden inside a body cavity, which was discovered during the booking process.

Ms. Youmans was sentenced to 180 days in the County Jail, placed on 4 years supervised probation which includes, among other things, that she abstain from the use of illegal narcotics and she is subject to drug testing and search and seizure.  The case was investigated by the Placerville Police Department, El Dorado County Sheriff Correctional Officers and prosecuted by Deputy District Attorney Brittany Griffiths. 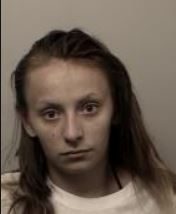