Garrett Ethen Stromberg, age 20, was convicted of Felony Domestic Violence with a Prior Domestic Violence conviction, misdemeanor Resisting Arrest and misdemeanor Possession of Heroin.
On June 22, 2017, Stromberg assaulted his girlfriend, ripping her sweatshirt and biting her.  Prior to the Sheriff's Department arriving, Stromberg fled.  On June 24, 2017 the Sheriff's Department developed information that Stromberg was hiding in the Gold Beach area off of Highway 49.  A team was dispatched to apprehend Stromberg but when contacted by law enforcement he fled across the river and into the woods.  Despite searching with a K9, Deputies were unable to catch Stromberg.  On July 10, 2017, Deputies spotted Stromberg while responding to a disabled vehicle call and he was taken into custody.  A search of his person at that time resulted in the discovery that he possessed heroin.
Stromberg, who was on probation for his prior Domestic Violence conviction at the time of these offenses, was sentenced to 408 days in the County Jail, placed on 5 years of Formal, Supervised Probation, ordered to complete a 90 day residential drug treatment program and a year of Domestic Violence Counseling. 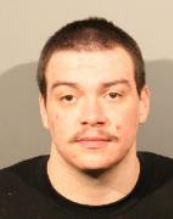