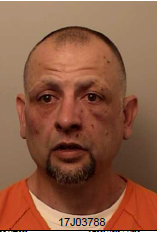 Mr. Blizzard has previous convictions for drug related offenses and a prior conviction for driving under the influence.