On September 25th, 2017, a jury made up of six women and six men found Todd Christian Robben guilty of eight felony charges involving threats and attempted threats targeted at a number of public officials including Superior Court Judges in El Dorado County. In addition to three El Dorado County Superior Court Judges, the defendant's victims also included a Lt. from the South Lake Tahoe Police Deparment, an Investigator from the State Bar, the City Attorney from the City of South Lake Tahoe, and a local attorney who represented the defendant on a misdemeanor appeal.

Deputy District Attorney Dale Gomes handled the case from the investigation stages all the way through jury verdict. The defendant's trial was heard in Sacramento before a Sacramento Superior Court Judge on an assignment handed down by the California Supreme Court after all of the judges sitting on the El Dorado County bench recused themselves. The defendant faces a maximum of 7 years in state prison at his October 27, 2017 sentencing hearing.

After learning of the verdict, District Attorney Vern Pierson issued the following statement: "I am pleased that a jury has convicted Mr. Robben of these crimes. I hope this sends a strong statement that El Dorado County won't tolerate threats or intimidation against judges or other public officials." 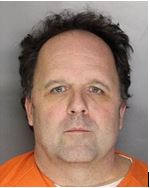